Welcome to Mission San Luis Obispo de Tolosa. For more than two centuries Mission San Luis Obispo has greeted travelers, pilgrims and guest with open doors and a place to rest. At the crossroads of the central California coast, the Mission lends heart and spirit to its vibrant surrounding community. We hope you will visit us. We are open year-round.

The Mission museum is adjacent to the gift shop. Both are housed in the original Convento Wing, which was once the residential quarters of the Franciscan priests and friars who served the community. The museum holds a collection of artifacts, including Native Californian, Mission Era, and American settlement.  Unlike other California missions, the doors of Mission San Luis Obispo are open to all every day of the year, but the Museum will be the same hours as our Gift Shop hours as listed below. We depend on your donations, but we do not charge admission. You may visit and return as often as you wish. Help keep our doors open. 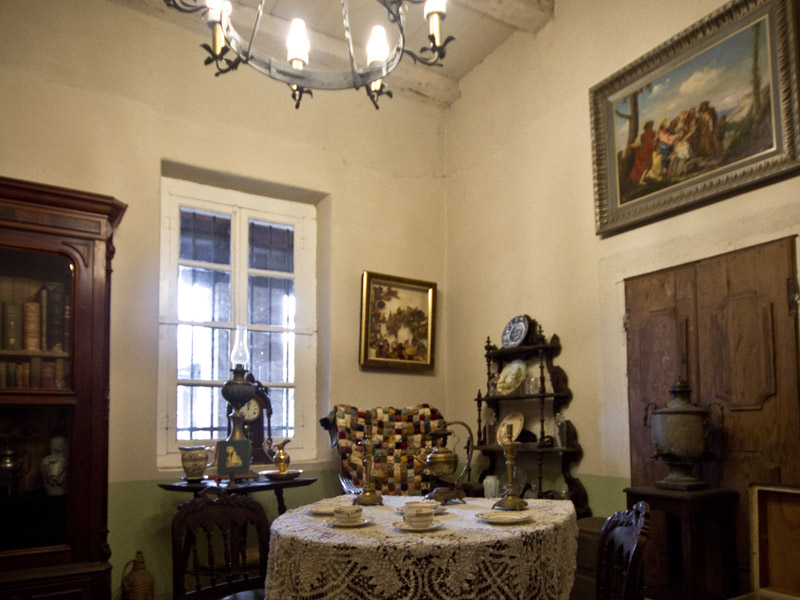 Our docents enjoy sharing their love of Old Mission. Most days, at 1:15 pm, a guided tour begins at the Mission Plaza doors in front of the gift shop. (Sundays at 2 pm)  You will learn how the Mission was built in stages over many years, who is buried in the floors (and walls) of the church, and the story behind the centuries-old art that still hangs from the adobe walls. Bring your best questions.

If you will be visiting as part of an organized tour, we are ready to help you. Throughout the year we host school tours, church groups, pilgrimages and professional tours. We simply need adequate advance notice to ensure sufficient staffing and coordination with other events.

Please contact us at least two weeks ahead if you will be visiting as part of a group or organization of more than 10 people. You will need to complete a tour request form that will help us anticipate your arrival, making your visit easy and enjoyable. Request forms can be found below. You may also reach the Parish Office at (805) 781-8220) for additional information.

We have had some changes in our policy for tours and ask that you please read the Policy Change for Group Tours prior to filling out the tour request form.

Click on the policy button below and after reading it, click on the button for the request form and download it to your computer.  Fill it out and save it using your school or organization name and Date of request.  Then email the form back to us.

Please send the completed form to conato@oldmissionslo.org, thank you.

A good place to begin your visit is at the Old Mission Gift Shop, just steps above Mission Plaza.  Please check days and hours to the right.  We will be closed Thanksgiving, Christmas, New Year’s Day and Easter. You will discover an eclectic mix of crafts, jewelry, art and books. You will also find a friendly staff willing to help you and answer any questions. All proceeds from the gift shop help maintain the historic Mission buildings and support its continuing ministry. We hope you will find just the right treasure to commemorate your visit.

The gardens are an integral part of the Mission campus. They have grown and evolved over centuries. The grape arbor is a reminder of the vineyards that once stretched for acres. Over time, cacti, succulents, roses, oaks and citrus have been added by pastors and guests alike. Find a bench, bring a book, take a rest. The Mission gardens are for your enjoyment.

The front portico was added in 1794, torn down in 1877 and restored in 1933. Wooden siding was added in the late 1870s and removed between 1920 and 1934. In 1769, Fr. Serra, a member of the Order of Franciscan Minors (O.F.M.), received orders from Spain to bring the Catholic faith to the Natives of Alta, California. Mission San Diego was the first mission founded in Alta, California that same year.

On September 7–8, 1769 Gaspar de Portola traveled through the San Luis Obispo area on his way to rediscover the Bay of Monterey. The expedition’s diarist, Padre Juan Crespi, O.F.M., recorded the name given to this area by the soldiers as llano de los Osos, or the level of the bears (Bear Plain) as this was an area with an abundance of bears. Since then, various translations of the Crespi Diary have called this area La Canada de Los Osos (The Canyon of the Bears) which has been further mistranslated as the Valley of the Bears.

In 1770, Fr. Serra founded the second mission, San Carlos Borremeo, in Monterey, which was moved to Carmel the following year. The people faced starvation as supplies dwindled in 1772 at the then four missions. Remembering the Valley of the Bears, a hunting expedition was sent to bring back food in the summer of 1772. Over 25 mule loads of dried bear meat and seed were sent north to relieve the missionaries, soldiers and neophytes (baptized Natives). The Natives were impressed at the ease by which the Spaniards could take down the huge grizzles with their weapons. Some of the meat was traded with the local people in exchange for edible seed. It was after this that Fr. Serra decided that La Canada de Los Osos would be an ideal place for the fifth mission. The area had abundant supplies of food and water, the climate was very mild, and the local Chumash were very friendly. With soldiers, muleteers and pack animals carrying mission supplies, Fr. Serra set out on a journey to reach the Valley of the Bears. On September 1, 1772, Fr. Serra celebrated the first Mass with a cross erected near San Luis Creek. The very next day, he departed for San Diego leaving Fr. Jose Cavaller, O.F.M., with the difficult task of building the mission. Fr. Cavaller, five solders and two neophytes began building what is today called Mission San Luis, Obispo de Tolosa.

After Fr. Serra left, the difficult task of actually building the mission remained. This was accomplished with the aid of the local Chumash Natives. Palisades were set up as temporary buildings, which were made simply from poles and tree boughs. However, due to fires in the first few years, adobe and tile structures were erected. The Church and Priest’s residence, the convento wing, was built by 1794. Many other structures made up the Mission in the early days: storerooms, residences for single women, soldiers barracks and mills. The mission also had land for farming and raising livestock. The whole community of priests, Natives and soldiers needed to produce goods for their own livelihood.

When the Mexican War for Independence broke out in 1810, all California Missions were virtually self-sufficient. Receiving few funds from Spain, building proceeded for a few years due to the prosperity of the Mission. Between 1810–1820, Native cabins, mill wheels and a granary were built, the quadrangle was finished, and the pillars on the priest’s residence were changed from the original square adobe columns to the round shape.

After 1818, the Mission’s prosperity began to decline, and by the 1840’s there was little left of the thriving community of earlier times. The buildings were crumbling and there were not sufficient funds to rebuild. In an “informe” (report to the Government written in 1830) Fr. Gil stated, “The hospital and portions of neophyte villages are in ruins and the rest of the village threatens to fall into ruins…the front of the Mission Church has to be taken down, because it threatened to tumble over.” In his 1832 “informe” he was even more dismal, stating “Every day the Mission structures are decaying more and more for want of sufficient hands to renovate them…the belfry mentioned last year has been demolished by rains, therefore we built another of masonry.”

Soon after Mexico won her independence from Spain in 1821, the Missions were secularized by the Mexican Government. This meant that the priests no longer managed the Missions and Mission lands were often sold off. Governor Pio Pico sold the San Luis Obispo Mission to Capt. John Wilson for $510 in 1845. During this time, buildings were appropriated for any use deemed necessary by the civil authorities. The Mission convento wing housed a school as well as a jail and the first county courthouse.

After California became a part of the United States in 1850, the first California bishop, Joseph Alemany, petitioned the Government to return some of the Mission lands back to the Church. Since that time, there have been considerable civic and political changes and the Mission has undergone dramatic structural changes. In the 1880s, the front portico/bell loft had to be removed, as it was so weakened by an earthquake. At this time, an effort was made to “modernize” the structures. The colonnades along the front of the convento wing were razed and both the Church and the residence were covered with wooden clapboard. A New England style belfry was added as well. These changes were effective in protecting the structure from further decay, and, in the 1930s during the pastorship of Fr. John Harnett, the buildings underwent extensive restoration to transform them back to early mission style. In 1893, an annex had been added to the right of the sanctuary and was extended in 1948.

The Name behind the Mission “San Luis Obispo de Tolosa”

The patron saint of this mission is Saint Louis, Bishop of Toulouse, France. Louis was born in 1274 and was the second son of King Charles of Naples. After being defeated in a war with Spain, Louis and his brother were sent, as hostages, to Spain for the release of their father. The brothers spent seven years in Spain, being instructed by Franciscan friars. Having absorbed the training, Louis decided to join the Order. After his release, he renounced his claim to the crown of Naples, joined the Order of Friars Minor, and was consecrated Bishop of Toulouse. Due to poverty and disease in the city, he fell ill and passed away at the young age of 23. He has always been very dear to the Franciscan Friars.

I would like to participate in the life of the Mission and to assist others through a one-time or regular donation.